BREAKING THE WALL OF SILENCE

Women are more likely to be a victim of a crime than men as they grow older, according to a new national research project conducted by Sage Advocacy.

The research – undertaken as part of Sage Advocacy’s Victims of Crime project, which was supported by the Department of Justice - analysed the nature and subject of crimes against older people and adults who may be vulnerable and who are often the subject of hidden crime.

The national organisation, which provides advocacy and support services to older people, adults who may be vulnerable and healthcare patients, said that abuse was the most common form of crime identified in the research project.

The project also identified that some victims of crime had a “fear” of reporting the crime, had initially “felt unsupported” or had difficulty identifying what services were available to them.

This highlights how important advocacy is in providing a bridge between a victim of crime and the supports that are available to them.

Sage Advocacy works with both primary victims, the individual that the crime has been perpetrated against and also secondary victims, the unintended person whom the crime affects, such as parents, family members, or friends of persons victimised by criminal acts.

Sarah Lennon, Executive Director of Sage Advocacy, said: “Our research, which was based chiefly on referrals to Sage Advocacy and feedback from a national survey, suggests that in the past three years women (57.59%) were more likely than men (42.41%) to be a victim of a crime.

“We also know from our research that in the past three years there has been an increase in domestic violence.

“Our Victims of Crime Project starkly highlights that adults, who may be vulnerable and reliant on others, suffered the highest level of abuse”.

Other key findings from the Sage Advocacy Victims of Crime Project highlights that 54.39% of referrals to the organisation relating to a crime occurred in intergenerational households or complex household structures where the older person shared the house with an adult child and their family or other relatives.

The research project also found that adults who may be vulnerable and who were aged 65 years and over were most likely to be the victims of financial abuse and domestic violence.

Ms Lennon said one of the most concerning issues identified by the research project was that many older people and vulnerable adults have not reported a crime due to fear.

Ms Lennon said: “One of the key elements that emerged during this project was that

there appeared to be a direct connection between levels of crime and Covid-19 lockdown restrictions.

“We know from our advocacy work that there are many different crimes perpetrated against people who may have to depend on others and every day we see how important advocacy is in supporting a victim of a crime as they face the emotional, financial, and legal effects of that crime. Sage Advocacy ensures that victims of a crime have a voice.

“During this research project we detected that some victims of crime had not initially known what to do or where to find support – this highlights the lack of a multi-disciplinary approach for victims of crime.

“We believe Sage Advocacy’s Victims of Crime project will benefit both primary and secondary victims of crime because we have identified that access to supports and services in Ireland for victims of crime is a serious problem and urgently needs to be addressed.” 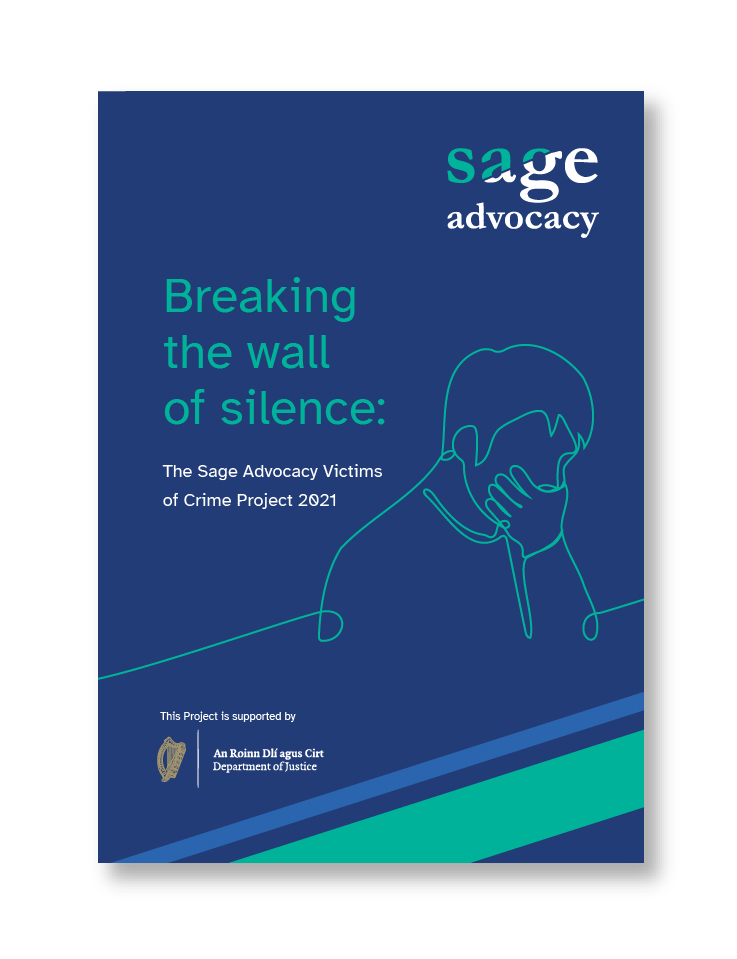 Breaking the wall of silence