Expert explains why homecare packages are vital May 26, 2017

The proportion of people aged 65 and over is growing rapidly here in Ireland. Currently amounting to 12 per cent of the total population, this figure will rise to 22 per cent (around one and a half million) by 2041.

What kind of future would you like in your old age? Most of us would prefer to stay in our own homes and remain independent for as long as possible.

But right now, this option is not available to many elderly Irish people.

Mervyn Taylor is the director of Sage, the Support and Advocacy Service for Older People, and he explains what’s happening on the ground right now for OAP’s…

Substantial numbers of older people are pressurised to stay in high-cost nursing homes when a lesser amount of money could support them to live in their own homes.

Family members can be well-intentioned, but sometimes with mixed motives can put pressure on older people to enter institutional care “for their own good”.

Sadly, through deliberate manipulation and “health and safety” concerns, some older people end up living in strange surroundings not of their choice. They suffer boredom and loneliness, while relatives live free of charge in the homes.

Since its establishment in 2014, the support group Sage has identified many cases where people are cajoled or forced to leave their home.

a man in his 60’s misdiagnosed with dementia whose house was immediately sold by family members when he was hospitalised for cancer treatment. He is now back in full health but without a home.
Another man in his 60’s seeking to return to his home, but denied access by his family.
A woman convinced to enter temporary respite in a nursing home who had to eventually take an expensive taxi home to her empty house, when family members consistently attempted to block her.

Usually the standard of care is not the problem, it is that the care is not available in the person’s own home.

Many families feel justified in pressurising older people, people with intellectual disabilities or acquired brain injury and other vulnerable adults to leave their homes because of lack of viable alternatives.

Inflexible rules and regulations regarding control of state service budgets are often responsible. A current case involves a man in his early-60’s denied a basic homecare package costing around €100 weekly who was pressurised into nursing home care at €1,000 a week.

Of this figure about 20 per cent need some form of support, but less than five per cent require institutional care, usually in the last few years of their life. The spending bias, however, remains firmly on the five per cent. Much more must be done to help people live longer and better quality lives in their own homes and communities as long as possible.

The alternative is that the costs of institutional care will continue to rise, taking even more supports away from people who wish to remain at home.

Out dated attitudes and practices in the legal, health and care professions often exacerbate the situation.

One example is the weekly Wards of Court sittings, still governed by the 1871 Lunacy Act.

Equally damaging issues arise around support provision, a lack of understanding and skill in functional assessments of people’s capacity to make decisions for themselves, and heartless and intransigent bureaucracy around care packages.

Nursing home care can eat up to 80 per cent of a resident’s income, leaving little or no money for other essentials, often leading to panic-led decisions.

A further issue is the use of ‘convenience medication’ (more properly called chemical restraint) in some care situations.

There are, however, grounds for hope. The 2015 Assisted Decision Making (Capacity) Act, puts the interests of older and vulnerable persons centre-stage. But its provisions are being rolled-out at a snail’s pace and major questions surround availability of resources.

The Government is also investigating extension of the Nursing Home Support Scheme, referred to by some as the ‘Unfair Deal’ to cover home care.

The Citizens’ Assembly will discuss the challenges and opportunities of an ageing society in early June.

A key question is why, despite decades of policy reports and recommendations to government, there is still a bias towards institutional care, with no formal legislative basis for support and care in the community.

If you are an older person of vulnerable adult seeking support, a concerned family member or a staff member of a nursing home or hospital, Sage provides information and advice on how to access independent support and advocacy services. 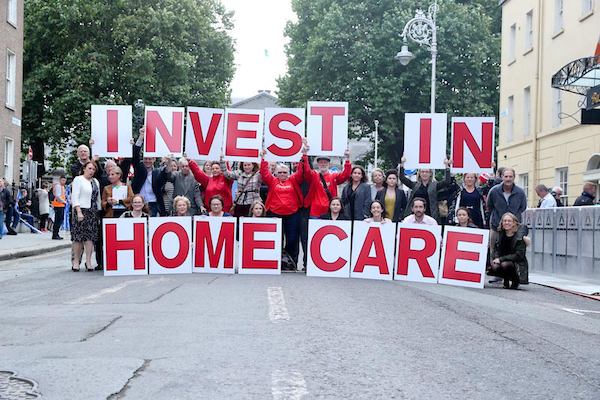